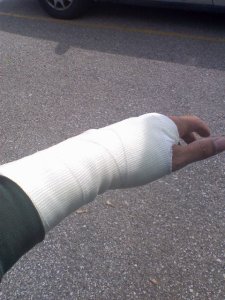 Sorry it has taken me so long to update everyone.  I found out that i have a fracture in my left (writing) hand and i’m wearing a cast that makes writing very difficult.  As a result, i probably won’t be getting back to my project until at least around June 24th, maybe later.  Please keep praying for me and the situation.

Thank you and God bless.

Exodus 21 – Treatment of Others

Yesterday was on the 10 commandments and the Israelite’s reaction to God, so i don’t know what i expected for chapter 21, but it certainly wasn’t this.  To put things in perspective a little bit; there were originally no chapters and verse in the scriptures.  They were added later on to help people study and reference the Bible better.  As a result when the text was originally written, there was no real division between what was commanded in 20 and then in 21.  So, God gave the people the 10 commandments / promises, then almost immediately we get into the topic that opens chapter 21: slavery!

Now i know that back in the day both supporters of and those opposed to slavery used the Bible to prove their point of view.  Ultimately though, it was those who understood that God’s view of humanity being created in His image and his redemption bringing equality to all that overcame and was a driving force in especially Great Britain’s move to make slavery illegal.  But when i started copying this chapter over it hit me.  Almost immediately after giving the 10 commandments / promises God begins the rest of the law and legal instructions with rules about slavery?  Isn’t that a huge piece of evidence that God is in SUPPORT of slavery?  Doesn’t that justify that abominable practice?

I was really struggling through this idea and concept for a good chunk of my writing this morning.  It was really bothering me.  Then, as i was writing, struggling with this, and questioning God about it; He brought an answer to my mind.  It’s not that He supported slavery.  It’s that He knew slavery was going to occur no matter what.  He set His 10 primary promises / commands then immediately He set the rules to protect those who would end up as slaves.  It wasn’t an attempt to encourage the mistreatment of His creation.  It was making it a priority to protect those least able to protect themselves.

The chapter continues by dealing with how to respond to murder / accidental deaths from other people as well as animals.  Obviously this is a very important aspect of the law to deal with.  This theme of protecting the innocent continues with the instruction that if two men are fighting and a pregnant woman is struck resulting in premature birth but no harm is done, then the husband may demand any fine he requests.  If there is an injury it is an eye for eye, tooth for tooth, burn for burn, hand for hand, etc.

If we call ourselves Christians, are we protecting those less able to protect themselves?  Do we live our lives taking responsibility for those around us?